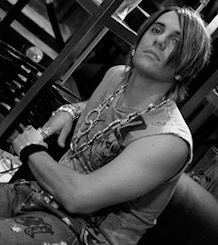 If you are reading this page, you are probably asking yourself: "Who is this Criss Angel guy, anyway?" A good question!

The best way that I can describe Criss Angel is by using the following three words: modern day mystifier. Criss Angel is largely known for his A&E TV show "Criss Angel Mindfreak", which ran for six seasons on A&E. (You can read more about the series here.) Criss is known for performing dramatic, off-the-wall, large-scale demonstrations and illusions. In other words? He is a magician. But he isn't like any magician that *I* have ever seen. If you ask me, the word "magician" doesn't really describe Criss Angel because he is so much more than what the public thinks of when they think of a magician.

"I've never heard of him," you may be asking yourself. "What exactly has he done?"

He has done many things.

Criss has performed dozens -- hundreds, maybe even thousands by now -- of different demonstrations and illusions over the course of his career. He has walked up the side of a building, for starters. He has set himself on fire for 45 seconds. He has been buried alive (and escaped). He has walked on water -- twice. He was submerged in water for 24 hours straight in 2002. He suspended himself from a helicopter using fishooks embedded into his skin. He levitated above the Luxor Hotel in Las Vegas. He made an elephant disappear -- and reappear. He made a lamborghini vanish. He was rolled over by a steamroller. He levitated between two buildings. He walked through a storefront window. And so much more.

Criss has performed more magic on television than anyone in history. That in and of itself is pretty remarkable. Criss is also the only magician to have received the "Magician of the Year" Award six times -- in 2001, 2004, 2005, 2007, and 2008 (twice). The International Magician's Society named Criss the "Magician of the Decade" and "Magician of the Century", an amazing accomplishment! In 2018, Criss was honored by the International Brotherhood of Magicians (IBM) with the "Lifetime Achievement Award", an award only given out 5 times in the past 100 years. (Read more about it here!)

What else has Criss Angel accomplished? Check out the complete list. 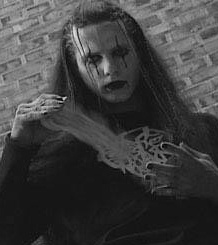 When most people think of Criss Angel, they think of his appearance. Criss does not look like your "average" magician! Magicians typically wear a top hat, a cape, and carry a magic wand. Criss Angel is the extreme opposite of this imagery, so much so that critics commonly label him as "goth". Because of the nature of some of his demonstrations, some have gone as far as to label him as "satanic", the "antichrist", and/or that he has supernatural powers of some kind.

What some people may not know is that Criss looked a lot more "goth" in years past than he does today!

For one of his early TV specials titled Supernatural, Criss donned white face makeup, black nail polish, a lot of black clothing, and he had long black hair. When Criss was approached to develop Mindfreak as a television show for A&E, he was told to "tone down" his image so he would be "more appealing" to a broader audience. So, he cut his hair and toned down the look a bit, although Criss is still known for wearing dark colors and a lot of necklaces/jewelry. Criss insists that he doesn't care what he looks like and that he doesn't care what people think of him in regards to how he dresses. Honestly, I couldn't agree more with that!

So, does Criss have supernatural powers and abilities? In a word, no. He does some incredible, mindboggling, mindfreak-y things, things that I cannot begin to explain, but in the end, he's just a human being with a heck of a lot of talent. ;)

I hope I have been able to explain to you a little bit about who Criss Angel is. The easiest way to learn more about Criss is to watch Criss Angel perform, either on his TV shows or live in Las Vegas!

I'm not one for writing huge biographies about a person -- I am sure I have left some things out here and there. So, if you want to know more about Criss' past, check out his biography here.